The English Department at The College of New Jersey (TCNJ) is offering a summer institute for English language arts teachers on “Teaching Drama (without Fear).”  The four-day institute provides 20 hours of professional development, covers a wide range of topics, and is taught by TCNJ faculty.

A brief overview of the history of Western drama focusing on genres – classical tragedy, Greek satiric comedy, Roman New Comedy, medieval mystery and morality plays, farce, Renaissance tragedy, drawing room comedy, melodrama, tragi-comedy – and on performance spaces and the conventions of those spaces. In the Western tradition, drama developed twice. In the classical world of Greece and Rome and their colonies, drama flourished until the fall of the Roman Empire. After Rome fell in the 5th century CE, drama was largely absent from the European literary scene until the High Middle Ages, during which religious drama arose. Early Modern playwrights such as William Shakespeare benefitted from and inherited both classical and medieval dramatic traditions. We also look at the spaces in which plays were performed: hillsides, banquet halls, church steps, courtyards of inns, early public and private theaters, proscenium stages, and theatres-in-the-round.

Our afternoon session focuses on some techniques for teaching Shakespeare, most of which can easily be adapted to other playwrights. Most of these are designed to get students to begin reading the plays – to introduce the complexities of the plot and characters, or to help them take some of Shakespeare’s more well-known speeches and plumb them for clues to staging and characterization. The workshop assumes little familiarity with William Shakespeare’s plays and focuses on a few comic texts that work well with students new to Shakespeare’s drama, such as Midsummer Night’s Dream, Twelfth Night, As You Like It, and Much Ado about Nothing.” Participants will practice some classroom activities that introduce the plays and others that help students talk about character, conflicts, and themes. 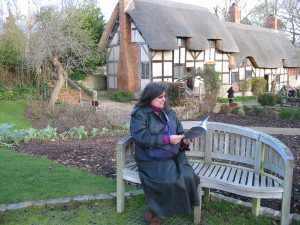 Diane Vanner Steinberg is an 19-year veteran of the Department of English at TCNJ who has taught grade 5 through graduate students.  Her fields are medieval and Early Modern studies, drama, British Romanticism, and the English language.  She has graduate degrees from St. John’s College in Annapolis, MD, and Indiana University in Bloomington and an AB from Harvard University.  She has directed and produced many student plays and has taught a course in British Theatre in London and Stratford-upon-Avon.  The recipient of two NEH grants, one to explore using film and live theatrical performance to teach Shakespeare and the other to study trends in Shakespearean scholarship, she has taught much of William Shakespeare’s canon and many other Western dramatists.